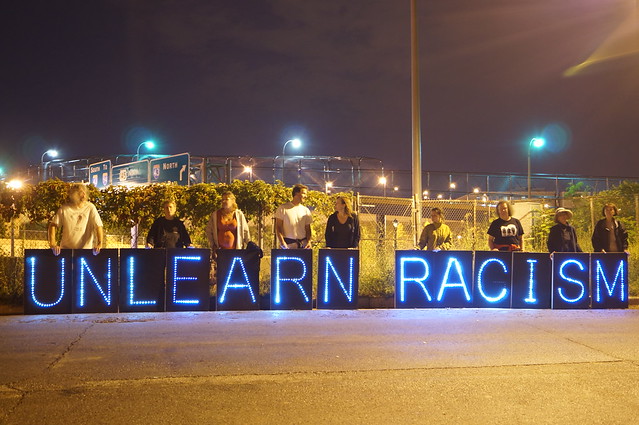 It’s Black History Month. It’s important to observe it. It’s important to remember and learn and recommit to eradicating racism. One part of my observation of Black History Month is an examination of White Privilege. I am examining it as a cultural phenomenon, for sure. But I am more interested in examining it as a reality I experience. I want to know the privilege around me and within me so that I can transcend it. If white privilege is a legacy of racism, then perhaps it’s a sin which can be healed.

Privilege is a lens I wear. I wear it the same way I wear my beard. When I am thinking about it, I can notice it. But most often, I just look through that lens unaware of how it is shaping the world I see. It’s easy to ignore most of the time. Recently, I have had a harder time ignoring the lens of my privilege. My privilege was re-revealed to me as I watched events unfold in Ferguson, MO following the killing of Michael Brown. It continued as I became aware of Eric Garner’s killing in New York and Tamir Rice’s killing in Cleveland. As I watched Ferguson erupt, I was reminded that a few short years ago, I was watching something eerily similar unfold in Florida. I have identified that eeriness: I had forgotten Trayvon Martin. That realization began this current struggle. I began to better see how my own complicity was part of the problem. How can I love my neighbor as myself and allow this realization to remain?

My struggle with my privilege is certainly about racism, its presence in my world and my life. But more simply, it offends my faith. I believe in sanctification and Christian perfection, the idea that sin can be eradicated through the grace of God. Why should this sin be any different? Does it really matter that it’s an old and enduring sin? It ought not. I believe it is possible in this life to transcend sin, to be so free from sin that sin doesn’t even try you anymore. With this belief, racism and white privilege make no sense. Nevertheless, throughout the holidays I felt my conviction ebb and flow. It flowed Thanksgiving week watching the DA in St. Louis drop the case against Darren Wilson. It ebbed as Christmas got busy. It flowed again as I felt the issue beginning to fade in my own consciousness. For one second, I actually wondered if my forgetfulness would lead to another killing. I don’t think that kind of guilt is useful, but I also don’t want the opportunity of this conviction to be squandered.

I have been thinking of white privilege as an addiction. Addictions are diseases in which the infected person participates in his/her own destruction. Also, in an addiction, the rewards and negative consequences of the addictive behavior get convoluted. Many alcoholics know that their drinking is bad for them, but they choose the short-term escape in spite of the long-term destruction. With white privilege, the default setting is to enjoy the privileges without even being aware. I believe that white privilege destroys whites by displacing values and dividing us from others, but many aren’t aware.

I value any constructive feedback. My feeling is that minorities have raised their voices quite enough. White people must increasingly choose to be part of the solution. We must be willing to try. We must be willing to honestly fail and be corrected. At one point, I thought of this as my speaking up. And while I do think that whites need to be speaking to other whites about racism, I know that our greater tasks are those of listening and learning. So I offer these insights with a question mark. Where I go wrong, please tell me. Where I am going right, please encourage me.