Note:  This series on The Church as it is presented in Acts seeks to:
(A) examine the character and praxis of the first church,
(B) apply lessons from the first church to the contemporary church and
(C) gain a more nuanced understanding of the relationship between discipleship, church life and leadership.

This examination is inspired by the many church leaders who espouse the “Acts 2 Church” especially in terms of numerical growth in the denominational church.  It is my hypothesis that that early church knew BOTH numerical success AND evangelical resistance; BOTH acceptance of the Gospel AND hostility to the Gospel; BOTH ecclesial integrity AND ecclesial corruption.  It is my further hypothesis that the Contemporary Church BOTH can grow numerically AND is resisted by the culture at large; BOTH can find arenas where Christ is welcomed AND where the Gospel is seen as a threat; BOTH exemplifies great faithfulness as a body of believers AND struggles with internal wrongdoings.

Being a Christian Necessitates Knowing Christ

“I wrote about all that Jesus did and taught from the beginning until the day he was taken up into heaven…” (1:1-2a)

To be a Christian is to be ‘like Christ’.  To be like Christ, after the death, resurrection and the ascension is to take upon oneself the entirety of Christ’s existence.  How many congregations began in barns, houses, schools and fields?  Even today, with the ubiquity of Christian architecture, how many congregations are birthed in congregations?  (That’s not necessarily rhetorical.)  Luke reminds us of Jesus’ suffering and of his resurrected ministry; 40 days of speaking about the Kingdom of God.  We follow a Messiah of promises made and kept.  “…You will be baptized by the Holy Spirit not many days from now.”

“It is not for you to know the times or periods that the Father has set by his own authority.” (1:7)

If there is a theological tangent I loathe, it must be dispensationalism.  I tire of answering John Hagee questions.  Jesus is telling the first church about the promised power of the Holy Spirit, and they are still in pre-resurrection mode: wondering when the good part’s going to begin.  When can they assume their thrones?  When’s the REAL kingdom coming?  The peaceful resurrection is all we get?  The power that Jesus promises them is not the power of a throne, not the power of a chariot, not the power of magic, not the power of might in any conventional understanding.  Conventional understandings don’t seem to impress Jesus.  The power of the Holy Spirit is connected to the task of being “witnesses” in Jerusalem, Judea, Samaria and the ends of the earth.  Jesus didn’t take a straw poll nor seek the advice of a steering committee.  He stated the clear commandment and moved on to higher things. 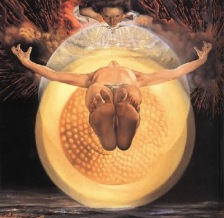 There are way too many Christians sitting on the sidelines staring at the clouds waiting for “What if?”  The men in white robes ask a pertinent question: Why have you not gone into action?  The quickness of the ascension parallels the quickness of the death and the minutes-long encounter at the empty tomb.  These events are vital to the person of Christ.  But he seems happy to get them over with.  It is as if the real Christian life is the daily drudgery of peacemaking, compassion, service and worship.  These vital events are almost like the altars Jacob built out in the wilderness.  Israelites passed by them countless times.  Each time, they stopped to remember, but not to build shrines, Temples, Cathedrals or churches.  That was Peter’s error.  The purpose of transfiguration is NOT to stay up on the mountain…it is to embody the change that you are working toward in the valleys.  Jesus ascended NOT so that people would adore him, but so they could get on with the work of witnessing.

Apparently there was an Attendance Pad in the Upper Room

“All these were constantly devoting themselves to prayer” (1:14)

The opening of one’s self to the comfort, power and instruction of God.  They were preparing themselves.  Even in the midst of fear, someone had a good idea.

Eleven disciples, certain women, Jesus’ brothers and many unnamed people.  The eleven will gain legacies.  Churches will present Living Last Suppers where each disciple gets to speak, and each disciple’s martyrdom is noted.  All the women are unnamed but Jesus’ mother.  Also unnamed are Jesus’ brothers and everyone else.  Given the bumbling nature of the Apostles, it stands to reason that some of the unnamed were just as productive as the 11.  We know that women pretty much run the church.  Emerging from the 120 were two that gain a name: Joseph/Barsabbas/Justus and Matthias.  They were present “from the baptism of John until the day he was taken up from us”.  Jesus was noteworthy for calling his own disciples.  How about a little love for the volunteers?  Did Jesus ever ask them to do anything?  Did they retrieve the donkey and colt for the Triumphal Entry?  Did Jesus wash their feet?  Were they in the garden?  I wonder what became of Joseph/Barsabbas/Justus.

By far, the most gruesome scene in the NT stars Judas.  Descriptions of his death gross me out more than the crucifixion.  (King Herod’s worm-infested death was pretty gross, too.)  I have often felt a certain sympathy for Biblical characters that can only be described as tragic; Saul, Sampson, Solomon, Noah, Jonah and yes, Judas Iscariot.  Is this sympathy for the devil?  I mean Jesus was going to die.  HE chose it.  He predicted it and rode right into Jerusalem.  In the Living Last Supper I enjoyed over Holy Week, Judas was portrayed as wanting to fast-track the revolution.  Judas kissed Jesus, people moved, Peter severs Malchus’ ear…the battle for Jerusalem is on.  But now Jesus is on the tree and the disciples have a reputation for chaos.  Better that one would die than for many.  I’m not really a conspiracy theorist, but I have often doubted that Judas died via suicide.  The prayer upon choosing Matthias seems to indicate a certain angry and final attitude that the Apostles held toward Judas.  They didn’t grieve him for long.  What really happened?

The fear of today’s church is not the same fear that the First Church experienced.  Today’s church seems to have the fear of change and bows at the god of complacency.  Itinerancy began as a pragmatic strategy to minister in the westward frontiers of America.  We’ve kept the itinerancy and dropped the pragmatism.  But the First Church’s fear was over actual, literal death…as well as the death of this great gospel that Jesus had shared with them.  Praise be to God that the second fear trumped the first one.  Either share the Gospel and die or don’t share and watch the Gospel die.  We have fear over the death institutional church.  And yet we seldom act as if the Gospel is a life or death matter.

There are men and women in white every Sunday, entering pulpits, manning the confessional booth, opening up the altar rails and presiding over tables of sacrifice.  In the Acts 1 Church, clergy are asking the pertinent questions and calling people to action.  We reassure people that Jesus will come back, but in the meantime, God needs witnesses and he has enlisted you.  Some will go astray and succumb to tragic ends.  For Judas it was a Field of Blood.  For others it’s alcoholism, health problems, addictions, family strife, etc.  The Matthiases of the world save the church all the time.  Alongside, not behind the men and women in white, are people named as leaders.  They interpret the time and invite people to prayer.  Alongside, not behind the leaders, are people numbered but not named.  Many of them are as faithful as any and will toil away in obscurity.  These are the foot soldiers of the faith.  They might become known, but usually only in association with another (ala Susanna Wesley).  For every man or woman in white, there are hundreds of unnamed disciples who are braving the Upper Room.  You can best believe that Jesus sees them.

One thought on “The Acts 1 Church”